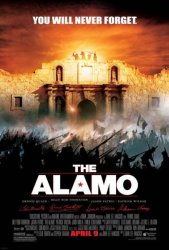 Synopsis: 'Alamo' is deals with many of the historical complexities -- including the Mexican point of view -- that were glossed over in John Wayne's 1960 film. Alamo heroes William Barret Travis' serial marital infidelities, Jim Bowie's slave trading and Davy Crockett's overall political incorrectness will also be addressed.

"you will never forget"

Marc Blucas Talks About 'The Alamo'

Astounded by the set...

First Look Of Billy Bob As Davy Crockett In 'The Alamo'

And other casting news...

Rookie Takes On 'The Alamo' Remake

And Ron Howard is officially off the project...

Due to a script rewrite...

'The Alamo' Gets Rewrite By Gaghan