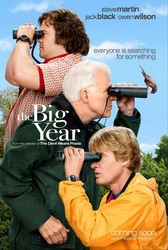 Synopsis: About three men who try to outdo each other in a bird-watching competition to spot the rarest birds in North America. The rivalry is an allegory for the challenges each faces in his own life.

Steve Martin's big year is getting even bigger as the Oscar co-host is in negotiations to go bird-watching in "The Big Year" alongside Jack Black and Owen Wilson. Read more...