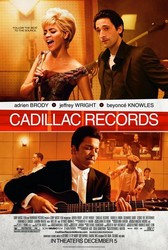 Matt Dillon has the blues. The "You, Me and Dupree" star is in final negotiations to play Leonard Chess, the legendary founder of the South Side Chicago blues label Chess Records, in Sony/BMG Film's "Cadillac Records." Darnell Martin ("Their Eyes Were Watching God") penned the script and is directing. Read more...

Darnell Martin is set to helm "Cadillac Records," which is being produced by Sofia Sondervan and Andrew Lack for Sony BMG Film. It will begin production this year in Chicago. Read more...