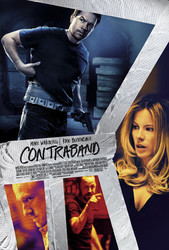 Synopsis: Follows a security guard (Wahlberg) who, after running into financial troubles, decides to go on one more smuggling run.

Mark Wahlberg announced plans to team with Justin Bieber for a big-screen effort for Paramount earlier this year and as he readies for the release of upcoming actioner Contraband, the actor-producer revealed why he wanted to work with the teen singer. Read more...

Caleb Landry Jones is in talks to join the cast of U's "Contraband" with Mark Wahlberg. Pic is a remake of the Icelandic pic "Reykjavic-Rotterdam" and is being directed by Baltasar Kormakur, who also penned, produced and starred in the original. Read more...

Ben Foster and Giovanni Ribisi are in talks to join Mark Wahlberg and Kate Beckinsale in the thriller "Contraband" for Universal. The Working Title production is a remake of the Icelandic pic "Reykjavik-Rotterdam" and is being directed by Baltasar Kormakur, who also co-wrote, produced and starred in the original. Read more...