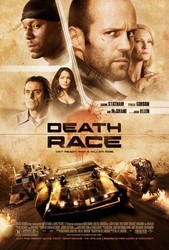 Synopsis: Sees a future America in which prison inmates are forced to brutally compete in an enclosed arena. Statham is starring as a prisoner who, with only weeks to go before his release, is coerced into being a driver in a road rally to the death and becomes a crowd favorite called Frankenstein.

Jason Statham, who stars in the upcoming SF-action film Death Race, told SCI FI Wire that the film is an homage to, rather than a remake of, the Roger Corman-produced Paul Bartel-directed 1975 cult classic Death Race 2000. Read more...

Natalie Martinez is negotiations to star as the romantic lead opposite Jason Statham in "Death Race," Universal Pictures' remake of the Roger Corman cult classic being directed by Paul W.S. Read more...