The Dukes Of Hazzard 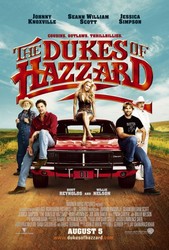 Synopsis: Based on the 1980s television series that made its debut in 1979 on CBS, and followed the weekly adventures of Bo and Luke, cousins who raised hell driving their souped-up Dodge Charger nicknamed the General Lee in fictional Hazzard County in the South. They, along with their cousin Daisy and Uncle Jesse, staged running battles with the corrupt authorities, Boss Hogg and Sheriff Roscoe P. Coltrane.

Johnny Knoxville Signs Up For 'Dukes Of Hazzard'

Broken Lizards Take On 'The Dukes Of Hazzard'

News that Jay may be directing...

Kutcher And Walker In 'Dukes Of Hazzard'