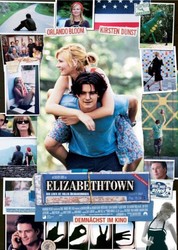 Synopsis: Hours after a ruinous product debut, suicidal industrial designer Drew Baylor learns of his father's sudden death. As the only son, Drew must travel to their small hometown of Elizabethtown, Kentucky to attend to his father's memorial. On the flight to Kentucky, Drew meets Claire, a quick-witted flight attendant, who helps him navigate the rough waters ahead and proves that amazing things happen when you least expect them.


Alec Baldwin Signs On For 'Elizabethtown'

With Dunst and Kutcher...