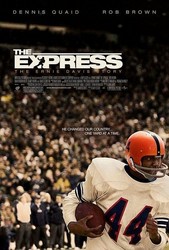 Synopsis: Based on the true story of football great Ernie Davis, with is directing. Davis broke college football records and racial barriers in the early 1960s playing at Syracuse University, becoming the first black player to win the Heisman Trophy. The running back was drafted into the NFL, but his career was cut short when he was diagnosed with leukemia


Dennis Quaid To Coach 'The Express'

Based on true story of football great Ernie Davis...