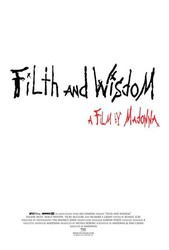 Synopsis: In London, A.K. is a Ukrainian Gypsy, seeking fame as a rocker, doing odd jobs: he's a dom, drives a hack, and runs errands for his neighbor, a poet full of self pity since going blind. A.K's flatmates are Holly, a ballerina who becomes a reluctant stripper in need of coaching, and Juliette, a pill-popping assistant at a pharmacy run by an Indian tired of his marriage. Juliette, estranged from her family, dreams of helping the poor children of Africa; A.K. has a crush on Holly; Juliette's boss lusts after her. Her hapless sister calls from time to time. The poet despairs. Is there a route from filth to wisdom for these souls? Can they find fun and fulfillment? A.K. provides philosophical comment.

Madonna To Direct 'Filth And Wisdom'

Madonna is taking a leaf out of husband Guy Ritchie's book and directing a film. Madge is due to start the filming of comedy Filth And Wisdom in London towards the end of April. Read more...