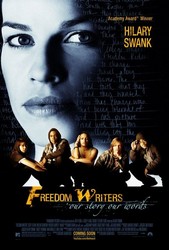 Synopsis: Based on a true story, Freedom Writers centers on a teacher (Swank) at a gang-infested Long Beach, Calif., school who is faced with the daunting task of teaching freshman English to a racially diverse class of teenagers. Staunton will play a colleague of Swank's character

Drama based on a true story...