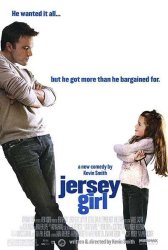 Synopsis: The story is about a man named Ollie Trinke (Affleck) and the effects a new wife (Lopez) and 6-year-old daughter have on his seemingly full life.