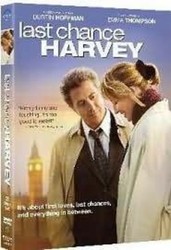 Synopsis: Romantic drama that follows a man (Hoffman) down on his luck who finds an unlikely companion (Thompson) while in London attending his daughter's wedding.

Dustin Hoffman and Emma Thompson are taking their chances on the romantic drama "Last Chance Harvey" for Overture Films. The Oscar-winning actors have signed on to star, and BAFTA-winning British helmer Joel Hopkins ("Jump Tomorrow") is set to direct from a screenplay he penned. Read more...