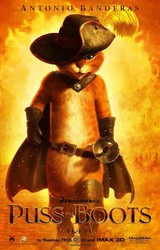 Synopsis: A story about the events leading up to the sword fighting cat's meeting with Shrek and his friends.

What's that about cat-scratch fever? Well, TV scribe Tom Wheeler's got it. Wheeler has been hired to write the "Shrek" spinoff "Puss in Boots" for DreamWorks Animation, a stand-alone feature foray for the feline assassin/swordsman voiced by Antonio Banderas in the two most recent "Shrek" films. Read more...

David H. Steinberg is to write...

As they hire two writers for project...