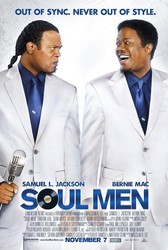 Synopsis: Though it's been some twenty years since they have spoken with one another, two estranged soul-singing legends agree to participate in a reunion performance at the Apollo Theater to honor their recently deceased band leader.

Sean Hayes has joined Samuel L. Jackson and Bernie Mac in "Soul Men," a Dimension pic now lensing. Story revolves around two estranged soul singers who reunite for a tribute concert at the Apollo Theater after the death of the third member of their former group. Read more...

Samuel L. Jackson and Bernie Mac will star as estranged soul-singing legends on a reunion tour in "Soul Men," a Dimension Films comedy that will begin production Jan. Read more...