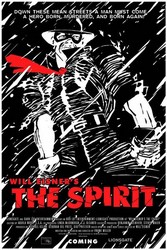 Synopsis: Based on a detective adventure strip about a masked hero who protects Central City using his fists, cunning and an unbelievable tolerance for punishment. The strip quickly became known for its cinematic and atmospheric feel, as well as for its femme fatales.

SCI FI Wire spoke to Miller by telephone on Dec. 13. Following are edited excerpts from that exclusive interview. The Spirit opens on Christmas Day. Everyone's talking about the visuals of your film, but how about the screenplay? How hard or easy was it to take the comic-book saga and adapt it into a script? Miller: It was very difficult, actually. Read more...

Eva Mendes will round out the cast for Frank Miller's "The Spirit," joining Scarlett Johansson, Samuel L. Jackson and Gabriel Macht. Miller wrote the script and will direct the movie, which marks the start of a multipic pact under which Lionsgate and Odd Lot Entertainment will co-finance and co-produce together. Read more...

Samuel L. Jackson is in negotiations to star as a mysterious supervillain in the Frank Miller-helmed comic book adaptation "The Spirit" for Lionsgate and Odd Lot Entertainment. Read more...

Frank Miller Is To Direct 'The Spirit'

Created by Will Eisner...

Will Eisner's 'The Spirit' In Live Action Movie

To be written by Jeph Loeb...