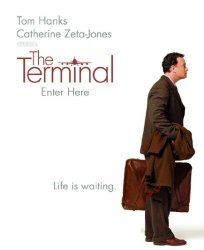 Synopsis: A Balkan immigrant (Hanks) makes an airport transit lounge his home after he learns that the borders of his war-torn nation have been blurred, voiding his passport and leaving him without a country. Making friends among the airport employees in the United States, including a baggage handler (McBride), he falls in love with a flight attendant (Zeta-Jones), which prompts his escape a year later.

Joining Tom Hank and others...