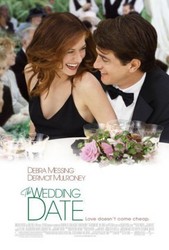 Synopsis: In this sparkling romantic comedy, Debra Messing plays Kat, a never-married New Yorker, who is invited to her parents' London home for her younger sister's wedding. What should be a joyous occasion bodes disaster for Kat, however, when she discovers that the best man will be none other than her ex-fiancé, who, two years before, inexplicably dumped her. In a desperate attempt to face the ordeal with dignity, Kat hires Nick (Dermot Mulroney), a charming and handsome professional male escort, to pose as her new boyfriend and escort her to the wedding. Even more valuable to Kat than Nick's good looks and charisma is his keen insight into human behavior--a well-learned trick of his trade. Over the course of the weekend, Nick takes on the role of the bride's therapist, the father's ideal son-in-law, the groom's new best friend and the object of every woman's affection. For Kat, what starts out as a pretend relationship with Nick begins to turn into something entirely unexpected: a second chance at love.