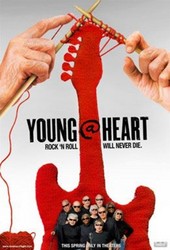 Synopsis: Follows a chorus of New England senior citizens who defy the stereotypes of old age by performing cover songs to rock and pop classics. The film follows the group as they rehearse, under a strict musical director, for their latest showcase in which they put a unique spin on a repertoire of songs from the likes of the Clash, Coldplay, Talking Heads and Jimi Hendrix. The group has traveled the world under the banner of the Young at Heart Chorus, a group formed 25 years ago.

Fox Searchlight has snapped up theatrical rights in North America to the docu "Young @ Heart," about a Massachusetts seniors chorus that covers tunes ranging from Jimi Hendrix to Coldplay. Read more...

Working Title Films has optioned the rights to the documentary "[email protected]" with an aim to adapt it into feature film. The critically acclaimed docu, which originally was broadcast in the U.K. Read more...