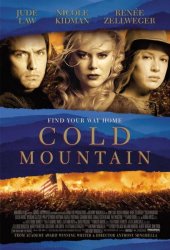 Synopsis: Based on Charles Frazier's best-selling Civil War novel of the same name, Cold Mountain tells the story of Inman (Law), a wounded confederate soldier who is on a perilous journey home to his mountain community, hoping to reunite with his pre-war sweetheart, Ada (Kidman). In his absence, Ada struggles to survive, and revive her father's farm with the help of intrepid young drifter Ruby (Zellweger).