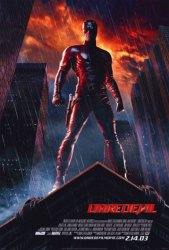 Synopsis: Attorney Matt Murdock may be have been blinded by radioactive waste, but that accident caused his other four senses to function with superhuman sharpness. By day, Murdock represents the downtrodden; by night, he is Daredevil, the "man without fear," a masked, acrobatic vigilante stalking the dark streets of the city and a relentless avenger of justice. (Based on Marvel Comics' legendary comic hero, the Man Without Fear.)

Too much 'excessive violence'

Happy with no spandex...

Watch the man without fear...

And news on teaser trailer...

First Look Of Colin Farrell As Bullseye In 'Daredevil'

And some quotes from the villians...

With news on a helicopter...

A bit blurry, but can see costume...

Farrel Gets Bullseye Role In Daredevil

Arch-enemy of the Daredevil(Ben Affleck)