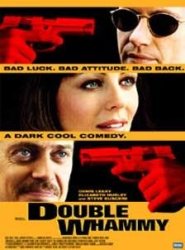 Synopsis: Ray Pluto has horrid memories of watching his wife and child die in a traffic accident. He's also a cop who's the laughingstock of New York City because his back went out while trying to stop a mass murderer - who was then shot by a child. For his back, he gets help from a chiropractor. Meanwhile, a teenager hires thugs to kill her father, who's the super in Ray's apartment building. In the same building, two young men are writing a movie script. Can Ray get past his grief to solve the assault on the super and also return the affections of the chiropractor?