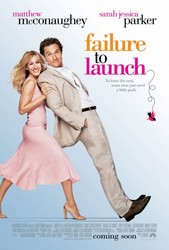 Synopsis: The story revolves around a thirtysomething guy and his parents. Moving back home to avoid getting into a relationship, he one day meets the girl of his dreams without knowing that she is someone who has been hired by his parents.

She joins Jessica Parker and McConaughey...

Tom Dey In Talks For 'Failure To Launch'

'Failure To Launch' For Paramount Pictures