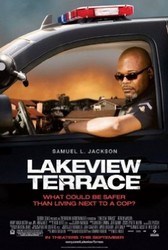 Synopsis: A thriller about a young interracial couple who move into their dream home and are increasingly harassed by their next-door neighbor, a tightly wound black LAPD officer. When the couple decides to fight back, the feud turns deadly.

Patrick Wilson has joined Samuel L. Jackson and Kerry Washington in Screen Gems thriller "Lakeview Terrace," which Neil LaBute is directing. Overbrook Entertainment partners James Lassiter and Will Smith are producing the pic, about an interracial couple who move into a new home only to find themselves harassed by their neighbor, a racist LAPD officer. Read more...

Screen Gems has set Samuel L. Jackson and Kerry Washington to star in "Lakeview Terrace," a thriller that will begin production in May. Overbrook Entertainment partners James Lassiter and Will Smith will produce. Read more...