The Legend of Zorro 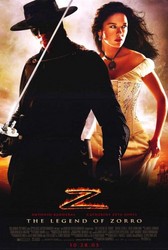 Synopsis: It has been six years since the last Zorro film. Now, he's back with an all new installment where he has been quietly settling with his own family in San francisco. His little boy, Jouqauin, is now 10 years old and contains no information of his father's secret life. When these angry tyrants come with plans of their own, Zorro is called upon to save the day against his new nemesis, Armand. Also Elena will be in mask as the try aspiring wife and new partner of Zorro.

Only did it for the fencing...

With the original stars...

He'd rather direct his wife in movie...

Zorro Is To Return In a Sequel

Director Martin Campbell, is to make a sequel to his hit film 'The Mask of Zorro'