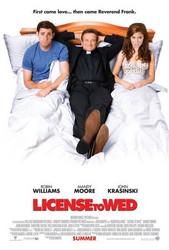 Synopsis: The story centers on a priest/marriage counselor testing the strengths of one couple's relationship through a series of increasingly grueling tests during a marriage preparation course from hell.


'License To Wed' For Christine Taylor

Ken Kwapis To Direct The Comedy 'License To Wed'