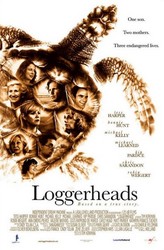 Synopsis: Inspired by a true story, and set in three different geographical regions of North Carolina, 'Loggerheads' follows the journey of Mark, a soft-spoken drifter in his 20s who makes a pilgrimage to a small coastal town near Wilmington in order to save the endangered Loggerhead turtles that nest on the beach in the summer. Mark's journey brings us into contact with three other characters, each at the crossroads of their lives. George is a local motel owner who, until now, has avoided dealing with his emotions. Grace, a middle-aged woman recovering from a breakdown, has returned to her hometown in the mountains near Asheville to stay with her mother. Plagued by the desire to fill an emotional void, Grace embarks on a search for the child she secretly gave up for adoption when she was a teenager. Elizabeth has lived a fishbowl existence as the wife of a minister for 25 years in a small town in the foothills of the state. When her safe, sheltered neighborhood starts to change around her, Elizabeth must decide whether to stand by her conservative husband's beliefs.