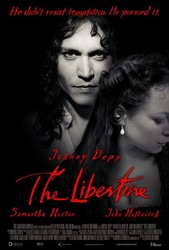 Synopsis: Johnny Depp stars in THE LIBERTINE as the scandalously decadent John Wilmot, the second Earl of Rochester. The film follows the Earl's adventures in London, from his passionate romance with a young actress, Elizabeth Barry (Samantha Morton), to the writing of a scurrilous play which blisteringly and bawdily lampoons the very monarch who commissioned it, Charles II (John Malkovich), leading to the Earl's banishment and eventual downfall.


Johnny Depp Gets Involved With 'The Libertine'