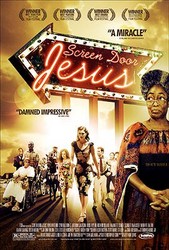 Synopsis: A cast of eclectic characters intertwines and collides around themes of faith, religion and race in a small East Texas town. The central thread is a vision of Jesus sighted on the back porch screen door of a local household. As media and crowds gather around the phenomenon, a series of interrelated dramas unfold. An interracial friendship between two young boys becomes tenuous when the white boy's family exploits the happening for money. The other boy faces conflict as he attempts to get his dying mother to a hospital in Houston whereas her husband wants to rely on God alone to save her. When a black man's attempts to secure a loan from a local white banker fail, a moral dilemma ensues between the banker and his own son. A local authority's adultery leads to another's attempts to expose him. And ultimately, an accidental killing and the perpetrator's reaction to it bring to surface conflicted feelings about faith and the moral conduct of everyday life. Meanwhile, everyone stands looking, and waiting for a miracle.