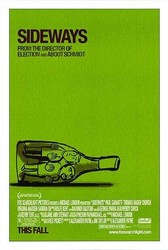 Synopsis: The movie concerns two friends on a week long trip through the California wine country. just before one of them is to be married. Jack Pitcairn is in his late 30s, a failed actor who is barely earning a living doing voice-over work. While he very much loves his soon-to-be bride, he is panicking about the loss of his long standing bacherlorhood, and the pressures he will be under to join his new father-in-law's real estate firm. It is through the suggestion of his best friend and best man, Miles Raymond, that the two go on this trip. Miles is a failed author currently teaching English at a private middle school who fancies himself an amateur wine connoisseur, when he's really nothing more than an alcoholic. Miles went through a nasty divorce two years previous, unwilling and unable to move on, who spends most of his evenings drinking and writing while trying to find a way to get published

With Paul Giamatti to star...