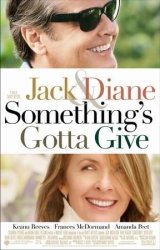 Synopsis: A young man (Keanu Reeves) plays a doctor caring for a man (Nicholson), who suffers a heart attack at the house of his young girlfriend's mother (Keaton). While there, the elder man falls in love with the mom (Keaton). The doctor also finds he has an attraction to her, despite their age difference.

In the untitled Nancy Meyers project...

Shooting will begin next year...