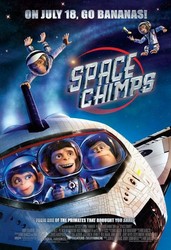 Synopsis: Two NASA chimps that are sent to a galaxy far, far away. One chimp has "The Right Stuff," and the other, a good natured goofball, has "The Wrong Stuff." The simian slacker becomes a reluctant hero and learns the true meaning of courage as he and his crewmates, the fearless Lt. Luna and their uptight commander, Titan, risk everything in an effort to save the peaceful inhabitants of a distant planet from the evil dictator Zartog.