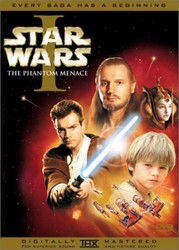 Synopsis: Sci-fi adventure which takes place before the birth of Luke Skywalker, featuring the friendship between the young Obi-Wan Kenobi and Anakin Skywalker, who would later become Darth Vader. The galactic government has been weakened, and when the peaceful planet of Naboo is threatened by the giant Trade Federation, it seems that nobody will step in to defend Queen Amidala and her people. Jedi Knight Qui-Gon Jinn and his apprentice Obi-Wan Kenobi are sent to find a settlement and discover the extent of the planet's peril. In the course of their adventures, they find a young slave, Anakin, whom Qui-Gon senses is destined to bring balance to the Force. Against Obi-Wan's suspicions, he decides to train Anakin as a Jedi Knight.

'Star Wars: Episode I' To Get 3D Release