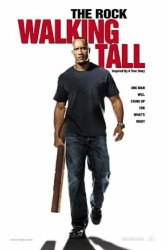 Synopsis: When a former member of the U.S. Army Special Forces returns to his small hometown in rural Washington State to revive his family's lumber mill business, he discovers that much has changed, as the normally tranquil town is now besieged by drugs, outbreaks of violence and a general feeling of malaise and terror, with many pointing a finger at the influence of a crooked casino where his ex-girlfriend now works as a dancer. Seeking to wreak vengeance, with a four-foot-long 2-by-4 in his hand, and righteousness in his heart, the highly-trained soldier, now the county's sheriff, and his deputy, realizes it's time to bust some heads with a very hard piece of wood.

The Rock To Start 'Walking Tall' For MGM