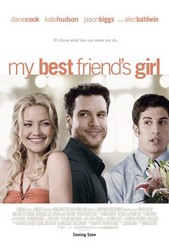 Synopsis: Follows a man named Tank, known for being hired to take girls out on absolutely terrible dates so they will crawl back to the boyfriends they dumped. When his best friend needs his help with the girl who dumped him, Tank struggles with his raging libido and the meaning of friendship.

Biggs, Caplan Board 'Bachelor No. 2'

Jason Biggs and Lizzy Caplan are diving into the dating game. The pair have joined the cast of the Dane Cook-Kate Hudson starrer "Bachelor No. 2" for Lionsgate. Read more...

Alec Baldwin has signed on to co-star in the Dane Cook-Kate Hudson starrer "Bachelor No. 2" for Lionsgate. Penned by Jordan Cahan, the story centers on Tank (Cook), who is hired to take girls on horrible dates so they crawl back to the boyfriends they dumped. Read more...

Kate Hudson's next movie will be "Bachelor No. 2" for Lionsgate, starring opposite Dane Cook. From a script by Jordan B. Cahan, storyline revolves around a man who is hired by men who have been dumped to take their ex-girlfriends out on nightmare dates, thereby convincing the women to return to their boyfriends. Read more...

Dane Cooks In 'Bachelor No. 2' Talks

Dane Cook is in negotiations to star in "Bachelor No. 2," a comedy that Howard Deutch is in final negotiations to direct for Lionsgate. Written by Jordan B. Read more...