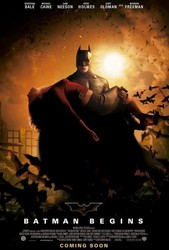 Synopsis: As a young boy, Bruce Wayne watched in horror as his millionaire parents were slain in front of him--a trauma that leads him to become obsessed with revenge. But the opportunity to avenge his parent's deaths is cruelly taken away from him by fate. Fleeing to the East, where he seeks counsel with the dangerous but honorable ninja cult leader known as Ra's Al-Ghul, Bruce returns to his now decaying Gotham City, which is overrun by organized crime and other dangerous individuals manipulating the system. Meanwhile, Bruce is slowly being swindled out of Wayne Industries, the company he inherited. The discovery of a cave under his mansion, along with a prototype armored suit, leads him to assume a new persona, one which will strike fear into the hearts of men who do wrong; he becomes Batman!!! In the new guise, and with the help of rising cop Jim Gordon, Batman sets out to take down the various nefarious schemes in motion by individuals such as mafia don Falcone, the twisted doctor/drug dealer Jonathan 'The Scarecrow' Crane, and a mysterious third party that is quite familiar with Wayne and waiting to strike when the time is right.


'Batman Begins' To Premiere On IMAX

On the same as theatrical...

In hopes to collaborate...

Pics Of Christian Bale As Bruce Wayne In 'Batman'

During the shoot in London...

First Look At The Batmobile From 'Batman Begins'

Both playing a string of villains...

Ken Watanabe Is Villian In 'Batman 5'

Not satisfied with previous movies...

He's the latest to join the Christopher Nolan-helmed project...

Viggo Mortensen As Villain In 'Batman 5'?

And Nolans view of Batman...

Expected to be offered the role...

Shooting next year for 2005

Hes having the time of his life...