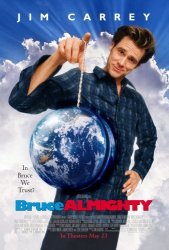 Synopsis: Carrey stars as Bruce Nolan, a television reporter in Buffalo, N.Y., who is discontent with almost everything in life despite his popularity and the love of his girlfriend, Grace (Aniston). At the end of the worst day of his life, Bruce angrily ridicules and rages against God -- and God responds. God appears in human form (Freeman) and, endowing Bruce with divine powers, challenges Bruce to take on the big job to see if he can do it any better.

'Bruce Almighty' Sequel In The Works

Universal wants to bring back "Bruce Almighty." The studio is in talks with the scripting team of Jarrad Paul and Andrew Mogel ("Hot Tub Time Machine," "Yes Men") to write a followup to the 2003 hit "Bruce Almighty." Project's being developed as a starring vehice with "Bruce Almighty" star Jim Carrey in mind. Read more...

Of Jim Carrey and Jennifer Aniston...

Cast also include Aniston and Freeman...

To be directed by Tom Shadyac...