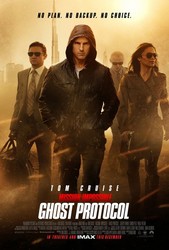 Synopsis: The IMF is shut down when it's implicated in the bombing of the Kremlin, causing Ethan Hunt and his new team to go rogue to clear their organization's name.

Simon Pegg is being brought back into the Impossible Missions Force fold. The actor is in negotiations to reprise his character of lab geek Benji Dunn for Paramount's "Mission: Impossible 4," which is being directed by Brad Bird. Read more...

Tom Cruise will return as Ethan Hunt in a fourth Mission: Impossible film to be released in May 2011, US movie studio Paramount Pictures has confirmed. Read more...