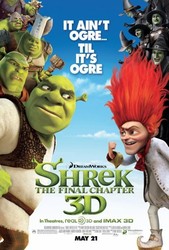 Synopsis: The further adventures of the giant green ogre, Shrek, living in the land of Far, Far Away.

DreamWorks Animation and Paramount will release the fourth installment in the lucrative "Shrek" franchise May 21, 2010. So far, the animated green ogre has the date alone. Read more...

The fourth Shrek instalment is in train, scheduled for release in 2010. The fifth, says, will be the last. "It's a finite story, has been from the beginning and I think that's part of its integrity, part of its strength, that we're not thinking this up as we go," he says. Read more...

With Shrek 3 in pre-production...