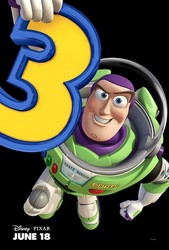 Synopsis: Woody, Buzz, and the rest of their toy-box friends are dumped in a day-care center after their owner, Andy, departs for college.

Pixar and Disney chief creative officer John Lasseter, "Toy Story 3" filmmakers, actor John Ratzenberger and a one-of-a-kind Lego head of Lasseter -- that was just part of the star lineup that came together here Sunday to unveil the toy line for and new details about "Toy Story 3" at an off-site event as Toy Fair kicked off. Read more...

'Toy Story 3' To Be Released In IMAX

"Toy Story 3," which opens June 18, will be released on Imax 3D screens as part of its wide release, Imax said Friday. The Pixar film, directed by Lee Unkrich, will be remastered for its Imax engagements with the proprietary Imax DMR technology. Read more...

The Walt Disney Co. is in production on Toy Story 3 via its Pixar Animation Studios, according to The Hollywood Reporter. The announcement came during Disney's annual shareholder meeting in New Orleans. Read more...

'Toy Story 3' Plans Have Been Scrapped

Pixar and Disney will not go ahead...

Creating their own digital animation studio...