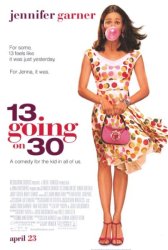 Synopsis: Described as a female "Big." It's about a 13-year-old girl who dreams of being popular. During her birthday party, she engages in a party game called Seven Minutes in the Closet. It turns out to be a humiliating experience for her, and she refuses to come out of the closet and be subjected to more embarrassment. When she eventually does emerge, she finds herself five days shy of her 30th birthday, looking fabulous and extremely popular.

"a comedy for the kid in all of us"

Along with Samuel Ball...

Described as a female "Big"