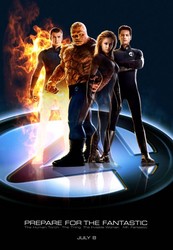 Synopsis: When an experimental space voyage goes awry, four people are changed by cosmic rays. Reed Richards, inventor and leader of the group gains the ability to stretch his body, and takes the name, Mr. Fantastic. His girlfriend, Sue Storm, gains the ability to turn invisible and create force fields, calling herself the Invisible Woman. Her younger brother Johnny Storm gains the ability to control fire, including covering his own body with flame, becoming the Human Torch. Pilot Ben Grimm is turned into a super-strong rock creature calling himself Thing. Together, they use their unique powers to explore the strange aspects of the world, and to foil the evil plans of Doctor Doom.

'Fantastic Four' & 'War Of The Worlds' To Clash

Plays a nurse that is to be romanced...

Brooklyn Bridge replica being made...

As the Invisible Girl...

'Fantastic Four' May Get A Craggy Michael Chiklis

And the rest are to be announced simultaneously...

He is currently in the running...

Of inside the Fantastic Four Lab...

Peyton Reed is to direct Mr. Fantastic, The Invisible Woman, The Human Torch and the Thing...