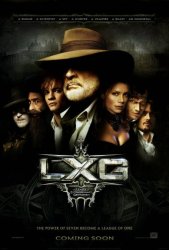 Synopsis: Set in Victorian England, the film centers around a team of extraordinary figures culled from great adventure literature who are recruited by a mysterious caller to stop a villain intent on turning the nations of the world against one another. This remarkable coterie of heroes is led by Allan Quartermain (Connery) and comprises Dracula vampiress Mina Harker (Peta Wilson), the Invisible Man (Tony Curran), Dr. Jekyll/Mr. Hyde (Jason Flemyng), Tom Sawyer (Shane West), Captain Nemo (Naseeruddin Shah), and Dorian Gray (Stuart Townsend).

Not tension but "Passion"

With his Lady Connery...

Power of seven become a league of one...

On a horseless carriage...

From the set featuring Sean Connery...

With Sean Connery back to good health...