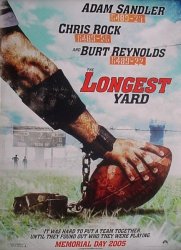 Synopsis: The original, released in 1974 by Par, starred Burt Reynolds as a retired pro football quarterback sent to prison and forced by a sadistic warden to lead a team of inmates against a team of guards. The remake will be set in present day but retain basic plotlines of the original.


Turturro Is Quaterback In 'The Longest Yard'

He will play the role of Brucie...

Nelly Goes 'The Longest Yard' In His Debut

Alongside Adam Sandlar and Chris Rock...

James Cromwell As Warden In 'The Longest Yard'

Which Gary Oldman was expected to fill...

"It was hard to put a team together...

With Chris Rock and Snoop Dogg...