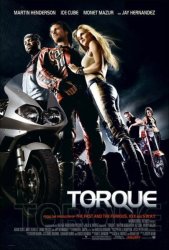 Synopsis: Biker Cary Ford (Martin Henderson) returns to his hometown to reunite with his girlfriend (Monet Mazur). Once home, Ford is framed for a murder he didn't commit, targeted for revenge by the victim's brother (Ice Cube) and pursued by the FBI as he tries to clear his name and outrace his enemies.

Set in the world of motorcycle racing...