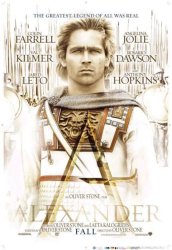 Synopsis: Alexander (Farrell), the King of Macedonia, leads his Greek legions against the giant Persian Empire. After defeating the Persians he leads his Army across the then known world venturing further than any Westerner had ever gone all the way to India.

Talks on the competing Alexander the Great projects...

"The greatest legend of all was real...

Straight from the flick...

Latest update on the movie...

Shooting to end in February...

Wearing some sort of nappy...

Colin Farrell Beefing Up For 'Alexander The Great'

Gaining an extra 20lbs of muscle...

Pressure On For 'Alexander The Great' Rivals

Battle To Film Alexander The Great

Stone and Luhrmann fight it out...

Oliver Stones 'Alexander The Great' To Get Head Start

They will start shooting in June...