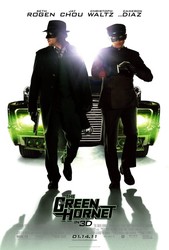 Synopsis: A newspaper publisher and his Korean servant fight crime as vigilantes who pose as a notorious masked gangster and his aide.

Christoph Waltz, who is generating raves for his role as a Nazi in "Inglourious Basterds," has signed on to play the villain in Columbia Pictures' action comedy "The Green Hornet." Waltz will play Chudnofsky, a Los Angeles crime boss who tries to unite the city's various gangs in order to form a supermafia. Read more...

Asian pop star Jay Chou will team up with Seth Rogen to fight crime in Columbia Pictures' new film version of "The Green Hornet," to be directed by Michel Gondry. Read more...

Columbia Pictures has set Michel Gondry to direct "Green Hornet," with production to begin later this year. Seth Rogen is starring, and wrote the script with Evan Goldberg. Read more...

Stephen Chow is flying high with "The Green Hornet." Chow is teaming up with Seth Rogen to bring the superhero to the big screen. Chow will not only star in the film as Kato but also make his American directorial debut. Read more...

Kevin Smith To Write And Direct 'The Green Hornet'

Based on the classic comic book...