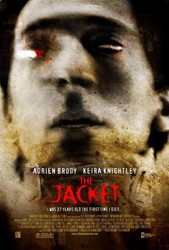 Synopsis: Centers on a soldier convicted of murder who, during his treatment in a psychiatric hospital, begins to believe that he is traveling through time. Through his time travel, he searches for a woman he met as a child and is fated to love.


Mackenzie Phillips Tries On 'The Jacket'

Is in negotiations to helm drama...