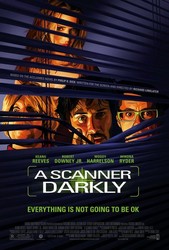 Synopsis: Set in a future world where America has lost the war on drugs, undercover cop Fred (Keanu Reeves) is one of many agents hooked on the popular drug Substance D, which causes its users to develop split personalities. Fred, for instance, is also Bob, a notorious drug dealer. Along with his superior officers, Fred sets up an elaborate scheme to catch Bob and tear down his operation


Three Screenshots From 'A Scanner Darkly'

Keanu Reeves To Star In 'A Scanner Darkly'

School of Rock director may be directing...