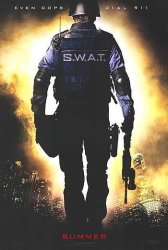 Synopsis: The tables are turned when the Los Angeles Police Department's S.W.A.T. (Special Weapons and Tactics) unit must protect a dangerous criminal. A "grizzled" veteran SWAT officer (Jackson) is given a second chance to cobble together a new SWAT team to protect the high-profile baddie. Plans go awry when the kingpin offers $100 million to anyone who can free him.

To be directed by Clark Johnson...

To be directed by Clark Johnson...

Writer for U-571, David Ayer, has been assigned to write 'SWAT'