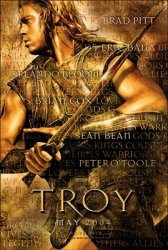 Synopsis: In the year 1193 B.C., Paris, a prince of Troy stole Helen, Queen of Sparta, away from her husband, Menelaus, setting the kingdoms of Mycenaean Greece at war with Troy. The Greeks began a bloody siege at Troy that lasted over ten years. Achilles was the greatest hero among the Greeks, while Hector, the eldest son of Priam, King of Troy, embodied the hopes of the people of his city.

"Myself and Orlando go at it"

Straight from the set...

Huge 'Troy' Set Could Be Largest In The World

Being built in Malta...

Alongside Pitt and Bana...

He has been added to the cast...

And he leaves Aronofsky's The Fountain...

Adaptation of classic The Iliad...